From Dark Discoveries editor Aaron J. French, the man who brought you Monk Punk and The Shadow of the Unknown, comes Songs of the Satyrs, an anthology dedicated entirely to the robust creatures of earthly pleasures. Songs of the Satyrs is a collection containing 20 short stories from distinctive new voices in horror as well as such notable authors as David Farland (a.k.a. David Wolverton; New York Times best-selling author), Rhys Hughes, Mark Valentine, W. H. Pugmire, and John Langan, with an introduction by Gene O’Neill.

“If there has been a previous fiction anthology devoted to satyrs I’m certainly not aware of it—in fact the existence of such an anthology seems as unlikely as these half humans, half goats themselves. But Songs of the Satyrs revels in such unlikeliness, its authors taking this mythical creature as a challenge to their imaginations to produce a variety of fantasy, horror, and science fantasy tales exploring sex, madness, appetite, and ecstasy.”
—Steve Rasnic Tem, author of Deadfall Hotel

“Get your Goat on! Songs of the Satyrs offers a host of modern Bacchanalian delights and dangers…because where there are satyrs, you know there’s going to be plenty of sex and intoxication (and strange naked rituals in the forest which don’t bode well for someone). OK, sure, you could visit a college frat for the same experience, but then you’d have to deal with the hangover. And that lingering goatish odor…”
—John Everson, Bram Stoker Award-winning author of Covenant and NightWhere.

Spirit Summoner (The Chosen of the Light) [Kindle Edition]

Darr has the ability to hear the disembodied voices of the spirits. Unfortunately, the spirits have nothing useful to say. A young, inexperienced Spirit Summoner, Darr often wonders at the purpose of such a useless ability. When an unnatural fire sweeps through his village, Darr sets out on a mission of self-discovery and curiosity.

As a Spirit Summoner, Darr learns he can enter the spirit realm. There he has access to the elemental magic contained within the Sephirs, legendary artifacts that once promised balance for a world turning towards chaos. Now, the Sephirs’ powers are dwindling since their untimely disappearance, and Darr is at the center of the quest to find and recover them. Suddenly, Darr’s curiosity is a whirlpool threatening to drown him, but his compulsion to see things through locks him into a journey attracted to disaster.

For the Sephirs do more than restrain the primal forces of magic. The Devoid, an evil long caged and hungry, has begun to loosen the bars of its prison. If the Sephirs fail, the Devoid will escape and feed on the Light of the living until nothing remains.

And the Devoid knows Darr’s lack of confidence is the key needed to free itself completely.

When a Rankan messenger is killed in Tyse, Randal, the Stepsons’ pet wizard, must read the dead man’s mind. What Randal learns brings Niko back from the Misty Isles of Bandara and forces Tempus and his Stepsons into an alliance unholy even by Tysian standards – with Cime the mage killer; Aškelon, lord of dreams; and the Rankan Third Commando, a fighting unit so cruel it gives even the Stepsons pause. Together with Tempus’ long-lost daughter, and his elemental lover, Jihan, they must venture beyond accursed Wizardwall itself to battle the Mygdonian Alliance and Roxane’s Nisibisi witchcraft.
The intrepid Band (whose central core is Tempus’ beloved Stepsons) must figure out who among the Tysian locals, Rankan soldiers, and Mygdonian defectors they can trust – before it’s too late. But in a world where a witch can turn a warrior into a flea, where gemstone frogs can rain from the sky, where no one is ever what he seems, where loyalties and ensured by curses, wizardry, and the favor of warring gods… only the immortal Tempus can guarantee an army’s success. And not even Tempus can tell the good guys from the bad in Tyse, where everyone plays both ends against the middle – or if the price of victory against Mygdonia will be his Stepsons’ souls in their battle BEYOND THE VEIL, sequel to BEYOND SANCTUARY.
Here is the new Author’s Cut edition, revised and expanded, of the second independent full-length novel in Janet Morris’ BEYOND series, far from notorious Thieves’ World™. Set in Tyse, a town so mean and magic-ridden as to make Sanctuary™ seem like a singles bar, BEYOND THE VEIL features Tempus – Thieves’ World most popular and misunderstood character – and introduces Kama, his warrior daughter, as well as Ranke’s deservedly infamous shock troops, the Third Commando.

About the Author:
Janet Morris is a bestselling novelist who is also well-known as the creator of the Sacred Band of Stepsons series and member of the THIEVES’ WORLD™ writing team. Her Sacred Band of Stepsons books include her BEYOND TRILOGY (BEYOND SANCTUARY, BEYOND THE VEIL, BEYOND WIZARDWALL), TEMPUS, and, with Chris Morris, THE SACRED BAND, THE FISH THE FIGHTERS AND THE SONG-GIRL, CITY AT THE EDGE OF TIME, TEMPUS UNBOUND, and STORM SEED. 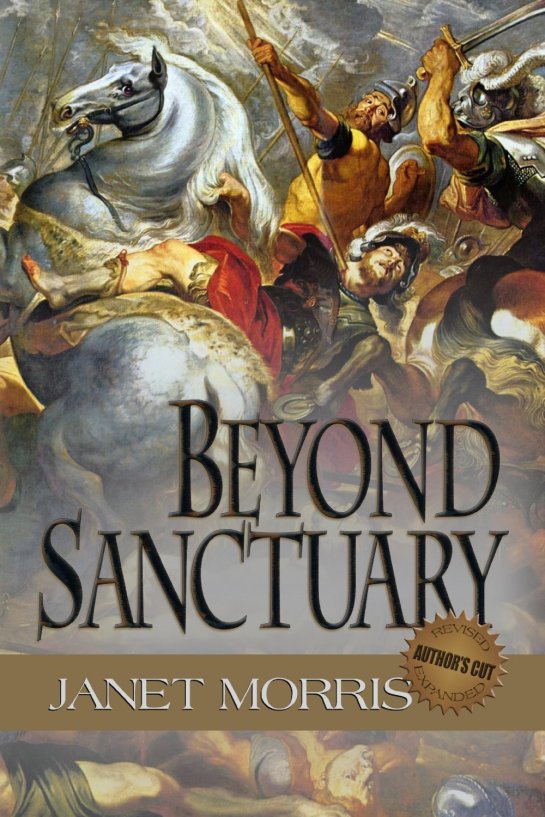 THE SACRED BAND GOES NORTH – TO WAR!
Here is the new, revised and expanded Author’s Cut edition of BEYOND SANCTUARY, the first ever full-length novel to take you BEYOND the notorious Thieves World™ fantasy universe, where gods still stalk the land, warring with demons and human sorcerers and trampling unfortunate humanity underfoot.
If you like stories of bold brave knights employed in meritorious duty, or tales of ladies delicate and fair, be warned. Beyond Sanctuary, set at the foot of notorious Wizardwall, may be too much for your sensibilities. There wizards, bards, and maidens mingle with murderers and thieves, and the fight breaking out at the next table may be the one that ends your life.
The hero of BEYOND SANCTUARY is Tempus, leader of mercenaries and warrior-servant of Vashanka, god of storm and war. With Niko, Cime, and the Froth Daughter Jihan, Tempus faces the archmage Datan and his unholy followers – in a battle for the Rankan Empire’s survival and that of his very soul. BEYOND SANCTUARY is the first novel in Janet Morris’ BEYOND series, followed by BEYOND THE VEIL and BEYOND WIZARDWALL.

About the Author:
Janet Morris is a bestselling novelist who is also well-known as the creator of the Sacred Band of Stepsons series and member of the THIEVES’ WORLD™ writing team. Her Sacred Band of Stepsons books include her BEYOND TRILOGY (BEYOND SANCTUARY, BEYOND THE VEIL, BEYOND WIZARDWALL), TEMPUS, and, with Chris Morris, THE SACRED BAND, THE FISH THE FIGHTERS AND THE SONG-GIRL, CITY AT THE EDGE OF TIME, TEMPUS UNBOUND, and STORM SEED.