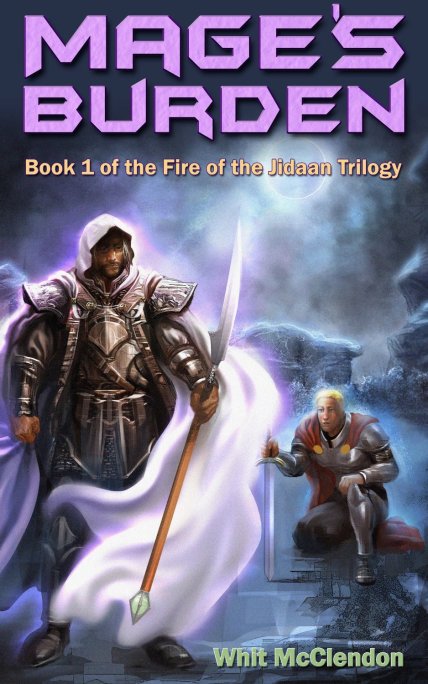 Mage’s Burden: Book 1 of the Fire of the Jidaan Trilogy [Kindle Edition]

For over two thousand years, the Realm of Talwynn has known peace. But now, the evil sorcerer Mordak has broken free, and the time for battle has come once more.

Brunar, a noble Mage, turns to the magick of six powerful and ancient weapons, the Jidaan, for aid. Millennia ago, the Jidaan were wielded by trained Guardians, each fully versed in the use of their magickal gifts, and highly capable warriors. Now, the Guardians are no more, and the Jidaan lay silent, waiting for those newly Chosen to awaken their powers. Even as Brunar searches out the soon-to-be Guardians, the vile Mordak prepares his murderous attack.

Afire with insanity, Mordak makes an unholy bargain with a brutal Daemon-God. Filled with unfathomable power, he unleashes his army of hideous creatures and undead soldiers across the land to slay everything it meets.

Brunar works feverishly to train his new Guardians in time, but only five of the six Chosen accept their destiny. Gart, a farmer with scars on his face as well as his soul, angrily refuses the call of the Jidaan. Nevertheless, Brunar plunges forward, teaching his new students the ways of magick and combat. When Mordak’s forces murder Gart’s family, Gart sets out alone, swearing revenge.

As war erupts, Talwynn’s bravest men, women, and the elf-like Weya answer the call to arms as Brunar leads the ferocious struggle against Mordak’s ancient evil. The untested Guardians must rise to the challenge, or else watch Talwynn burn…