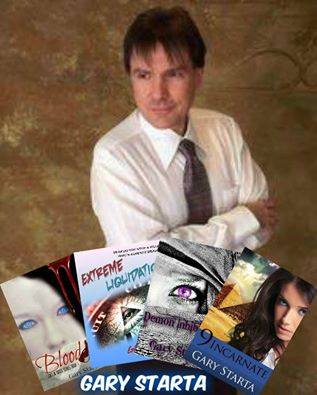 GaryStarta is a former journalist who studied English and Journalism at the University of Massachusetts in Amherst.His love for science fiction compelled him to write his first novel What Are You Made Of? published in 2006. Inspired by Isaac Asimov, the science fiction novel focuses on intelligent artificial life and whether sentient androids should possess the same rights as humans. The androids in Starta’s novel are created as hybrids – part machine, part human – further blurring the line between human and machine. Starta foresees a near future where humans will be forced to decide if intelligent machinery is indeed a life form. Possibly, in this near future, some humans will possess computer enhancements to overcome disabilities becoming hybrids themselves. The line between biological life form and mechanical life form continues to be examined in 2010’s Gods of the Machines.

Starta’s crime novella ‘ Murder By Association’ blends mystery with forensic investigation. It is a departure from previous books because it contains no science fiction or paranormal elements. Its follow up is 2012’s Kindred Killers. Additionally, Starta foresees his 2008 novella ‘ Alzabreah’s Garden ‘ – a fantasy romance – as another out-of-the-box effort.