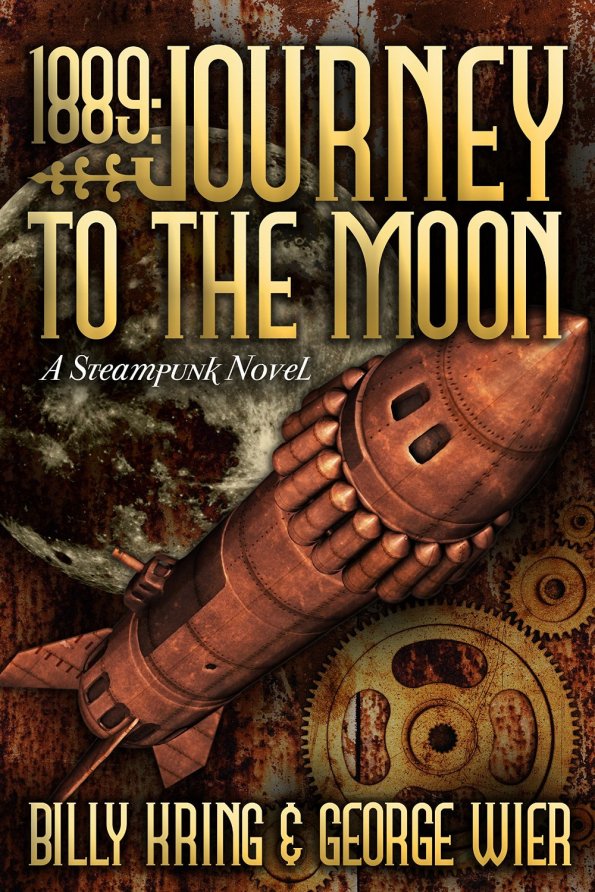 1889: Journey To The Moon (The Far Journey Chronicles) [Kindle Edition]

It’s 1889. Eleven people are on a strange steam-powered anti-gravity spaceship to the Moon. Included in the crew are such unlikely passengers and crew as: Billy The Kid, Nikola Tesla, Jack The Ripper, a Sioux warrior out for the blood of George Armstrong Custer (who did not die at the Little Bighorn), a Cossack warrior-princess, a battery of robots, a half-man and half-cyborg engineer, a Punjabi mathematician and linguist, a big-game hunter from Africa, and the great-grandson of Blackbeard the Pirate, not to mention the genius who designed the ship. There are aliens on the Moon with evil intentions, the robots are wound a little too tightly, and no one knows that the Ripper is along for the ride except the Londoner himself.

What could possibly go wrong?

Accolades for 1889: Journey to the Moon:

Kring & Wier vault to the head of the burgeoning steampunk genre with this hyper-extrapolated, richly detailed saga. Every nut and bolt is tightened in place, and the cast of characters is a rogue’s gallery of 19th Century mad scentists, outlaws and adventurers. I haven’t had this much fun going to the Moon since H. G. Wells sent Bedford and Cavor into the sky.
K. W. Jeter, author of Infernal Devices and Fiendish Schemes

Reads in the best way like a lost Jules Verne and H.G. Wells collaboration. Sense of wonder and the magic of great storytelling drive this fast-paced, steam-driven tale to a stunning conclusion with some adventurous stops along the way.
Joe R. Lansdale

1889: Journey to the Moon is a rip-roaring steampunk thrill-ride with a wonderful cast of characters. Bring on the sequel!
Bill Crider, author of the Sheriff Dan Rhodes Mysteries.

Kring and George Wier elevate the Steampunk genre to its pinnacle in 1889: Journey to the Moon. More than Verne, more than Wells, these two have created a thrill-a-minute adventure with a menagerie of unlikely characters, such as Billy the Kid, Nikola Tesla, George Custer and so many others. And what’s truly amazing, the science is plausible! This book will astound and entertain. Add in the special bonus of authentic language, dress and mannerisms, and you have the makings for a classic SF/steampunk novel that will go down in history—or rewrite it!
T.R. Harris, author of The Fringe Worlds